Don’t daunted by the idea of starting a building project. Writing as the dust settles, quite literally on my own home extension, I can confirm it doesn’t have to be an ordeal

Mine was a relatively small build so I opted to self manage. You may choose to employ a project manager. Either way, whether you’re a budget conscious landlord or planning a grand design style make-over, it’s important to get a few things right

Go and see the planner before submitting your application. It saves wasting time on things they’ll turn down. In addition, it sets-up a good relationship early on & in my case really sped-up the process once I submitted my application. 5 weeks in total

Choosing a builder
Never easy. Tempting as it is, price shouldn’t be the only factor. Recommendation is best. If you don’t know them, ask to speak to previous clients, visit a past project, read reviews/social media comments. There are organisations like the FMB where you can find a list of builders met at least some basic quality criteria
After whittling 6 quotes down to 2, it came down to who I thought was most honest, I could work with and also tolerate for 4 months!

Building inspectors
I’d been told councils can be difficult. I’m not sure that’s true but I used a private company (JHAI) all the same. They act as a kind of middleman between you and the council. The chap was helpful & efficient, advising at all the important stages. Reasonably priced too.

Give as much detail as possible when seeking quotes
For better or worse, I did my own drawings (sketched-over from scale drawings from the surveyor). Not entirely recommended! 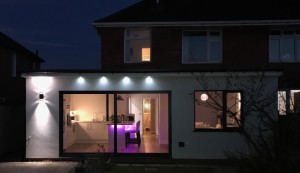 It was time consuming & the lack of detail made builder’s quotes less reliable and harder to compare. The danger here is the cost bumping-up later when the unexpected crops up. That said, you can save you money with a builder who’s experienced enough to fill in the gaps. With or without architect drawings &/or brief your builder will ask for your general level of finish. Prices, products & quality vary enormously. Do your research & try to give specifics. What exact skirting do you want & from where? Solid oak or panel doors? Metal or plastic fascias & guttering? Aluminium doors? What colour? What type of render? Wood cladding, cementboard? As for joinery. There are a million jobs for a good carpenter as you near completion. Try to get it thrown in to the quote

Electrics
A good electrician will help you but try to have a clear idea of number, type & position of lights, switches & dimmers. Get more sockets than you think. Buy lights in advance e.g. outside wall lights, garage lights, bar lights and so on, & have them ready for the electrician. Try to get the jobs included in the quote that you’ve always wanted done but never bothered like hanging-up that lampshade you always intended to, moving lights & switches in bedrooms etc. A technical point since I almost forgot. A kitchen needs a 60 litre/min extractors or 30 litres/min if over the hob (Building regs). Don’t forget, like plumbers, builders & electricans work closely on things. Get them together as regularly as possible

I had a major water leak that could have been devastating had it not happened before the floor went in. Worth talking through liabilities with the builder should something major like that happen. Builder’s insurance goes without saying. On a personal note, we’re disappointed with the position of the boiler flue (outside a landing window). A result of my of sketchy plan, ignorance of building regs & not being there at installation

Think about details
Where do you want an outside tap? How will pipework be hidden? What style of radiators? Do you want pipes from the floor or wall? Visit lots of bathroom stores. You’ll get a better deal if you know what it costs down the road plus there are installation practicalities you’ll learn about like hiding a cistern in a wall cost £100s more. Some walls are too thin anyway. Sinks hang-off wall battens so make sure they’re in place before the walls go up… Yes I did forget

Kitchen
If money saving is important do you need Italian polished granite? Composites look amazing (shop-around). There are great budget laminates too. Will you notice if units are 19 not 20mm? Aren’t soft close doors actually quite annoying anyway? Do you need 10 drawers? You’ll save £100s with fewer. Do you need all those wall units? It’s more contemporary to have a clean wall now Plus you can personalise with smart shelving. Visit builder’s merchants. Go on the internet. You’ll find handles, pull-out bin units & taps for a fraction of the price of kitchen suppliers. Landlords check out LNPG. They can offer sometimes better-than-trade discounts on Magnet kitchens & lots of other products by uniting landlords in to one national purchasing group

Decoration
What doesn’t the quote include? Coats of paint? Tiling? Who’s buying the tiles? I was nearly drawn-in by expensive off-whites before coming to my senses. Pure brilliant white looks great

Doors & windows
For large patio doors you’ll need to go aluminium. UPVC won’t support large panes of glass. Prices vary massively so shop around. I went for sliders over bi-folds realising view, not open-ability was my priority. Delivery times are long so order early. Yah and believe it or not, UPVC actually looks pretty good in grey, so if you’re trying to save the pennies and you’re going grey on an aluminium bi-fold, go UPVC on windows and get a colour match. You won’t notice they’re different.

Putting right damage
Get an agreement from the builder that they’ll put right things that occur as a result of the build. In my case a sunken drive due to concrete lorry, a knocked-over fence, major cracks in walls & wallpaper upstairs as a result of the new steels going in (wait a few months for it to settle before re-decorating). Getting trades in later is expensive. Include it in the quote and hold back money for such eventualities

Agree the price of extras as you go
Problem is these decisions are often needed on the spot so difficult but you don’t want any major surprises at the end. I didn’t escape the final final bill scenario either

Factor in blending old with new
Some issues/costs arose as a result of trying to blend old with new e.g floor, celing and walls of the room leading to the new extension needed replacing, insulating and decorating. I hadn’t factored that in and the builder didn’t point it out. It represented the majority of my over-spend

Garages/stores
Agree what the internal finish will be upfront. Skimmed? Fibre-boarded? Painted? Mine’s ok but more rustic than I would have wanted. Is the garage door included in the quote?

Appliances
They vary a lot. Neff is high-end. AEG middle. Don’t assume own brands are bad but do your research. It’s certainly worth comparing outputs of induction hobsI avoided an integrated microwave. Only heard bad things

If there’ll be some fixing to the garden needed at the end, is it included in the quote? Can you get some landscaping thrown in too?

Remember too…
•It’s easy to get carried away on spending. Keep records. Useful for the taxman on investment builds and good for keeping you on top of your spending
•Get an airmiles/points card! You can dream of returning to your lovely new home as you jet off to Barbados in business class!
•A new home needs new things. Keep plenty in reserve and shop for furniture in good time
•You have a lovely new space. Plan what you want in it or the old tat will creep back in
•Your house will be seriously knocked about. Prepare for major disruption and dust. Seal-off areas, tape & nail doors shut & plug gaps with dust sheets. Still it won’t be enough though. Box-up & ship-out all your most treasured possessions
•Set yourself up for the long-haul. Which rooms will you live in while the building’s going on? Where will you eat? Where will your temporary kitchen go? How do you plan to wash-up? Ideally next to a water supply. Get the builder to set it up for you
•Communicate, communicate, communicate with your builder. You don’t need misunderstandings & fallings-out
•Builders can be messy. A secondhand ‘Henry’ is useful to. Portaloo hire might be worth it if you want to keep dirt outside
•Timing makes things more bearable. Summer’s a better time to be without heating, gas & electric. Less mucky too